Total success of the Cyclocross World Cup in Benidorm with more than 15,000 attendees

The Dutch Mathieu Van del Poel and Fem van Empel are the winners in the Elite male and female categories respectively. 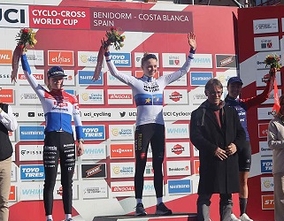 The celebration of the Cyclocross World Cup in Benidorm has been a complete success both in attendance and organization, in addition to the invaluable promotional impact it has had for Benidorm as a destination for sporting events, especially cycling.

More than 15,000 fans have gathered in the city to enjoy this event that has not disappointed anyone. After Saturday with the national championship races, the main event took place on Sunday with the dispute of the World Cup event in the Elite male and female categories.

From early in the morning the city was filled with a unique cycling atmosphere, and even more so in the surroundings of the circuit throughout Foietes and El Moralet Parks. Both parks were crowded at all times with a public that did not cease to encourage athletes throughout the day.

The first race was the women's elite, in which the Dutch cyclists were undoubtely dominators by taking the three podium drawers. The race was won by Fem van Empel, while the second and third position went to her conationals Puck Pieterse and Shirin van Amrooij.

In the men's elite race, one of the favourites, the Dutch Mathieu van del Poel, conquered the race, followed by the Belgians Wout van Aert and Eli Iserbyt. Actually, it was the first time that Wout van Aert competed in Spain. Fourth place went to Laurens Sweeck, also from Belgium, and fifth to current world champion Thomas Pidcock from Britain. The first Spaniard was the cyclist from Villajoyosa, Felipe Orts, classified in the ninth position.

This great sporting achievement places Benidorm as a reference in the world of cycling.